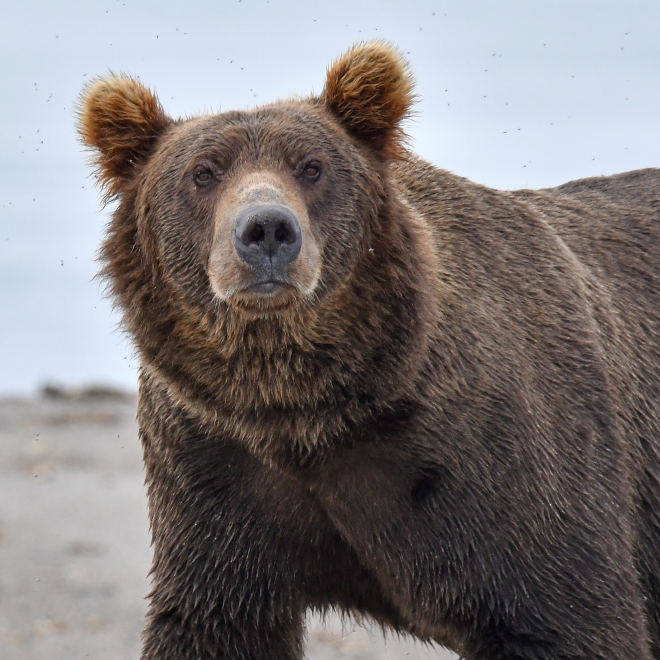 To wander unarmed amongst apex predators is an experience unlike any other. It challenges your arrogance, exposes your insignificance, and can unleash a primal fear that may otherwise lie dormant for an entire lifetime if not tested. You suddenly find yourself of absolutely no consequence and realize that any interactions or encounters will be strictly on their terms. Surrendering control is a very strange feeling and a little frightening. Every other wildlife encounter I’ve had, the animals have, to some degree, been influenced by my presence, usually causing them to flee or at least wander off in a different direction. Not here. On the banks of these streams in Hallo Bay Alaska you’re most likely viewed as simply a nuisance, but nonetheless tolerated. The most humbling experience I’ve ever had, by far, was kneeling on the bank of the river as a 700 lb coastal brown bear, a larger strain of the grizzly, slowly passed by so close I could almost reach out and touch him. You’re completely motionless, totally absorbed in the moment, and immensely relieved and exhilarated when that moment passes. Through it all, the foremost thing on my mind was, is this the day this particular bear decides he doesn’t want intruders hanging around his fishing hole ? Even the slightest hint of aggression on his part, at such close quarters, surely would have sent me into uncontrollable ” flee or die” mode which can trigger a chase response in the bear and that never ends well. I’d never felt so tiny, exposed, and insignificant in my entire life.

John Mcphee writes; ” The Grizzly can be brave and sometimes downright brash. He can be secretive and very retiring. He can be extremely cunning and also powerfully aggressive. Whatever he does, his actions match his surroundings and the circumstances of the moment. No wonder that meeting him on his mountain is a momentous event, imprinted on one’s mind for life”.

” We must assume our existence as broadly as we in any way can; everything, even the unheard of, must be possible in it. That is at bottom the only courage that is demanded of us: to have courage for the most strange, the most singular, and the most inexplicable that we may encounter”