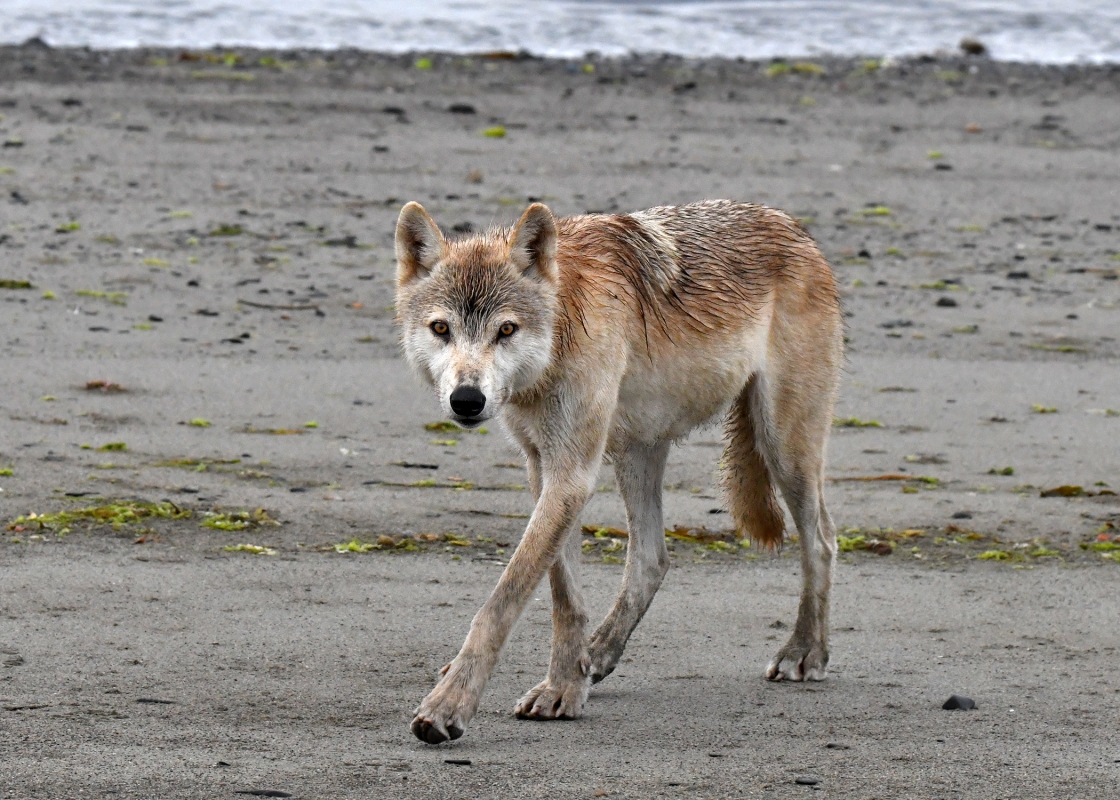 When a wolf says good morning

I can hear someone calling my name, but it’s far off, like when you’re dreaming but half awake. I hear it again, this time much louder and more forceful. ” Gary, you need to get back behind the fence”. The fence is a flimsy, 2 strand, solar powered affair encircling our camp which is situated on a small bluff about 4 feet high and 100 yards or so away from the shores of the Shelikof Strait in Katmai National Park. It’s meant to deter the roaming regulars from entering our camp. The sun hasn’t been out for 2 days which led me to eventually question the fence’s effectiveness. Our guide just smiled and admitted “it’s pretty much there just for show”. And this fence was the only thing separating me from the bears and other animals that would leave tracks on the beach a mere 100 feet from my tent each night while I slept. Thankfully, a full day of hiking and the fresh, brisk air brought sleep quickly. This was no place to be lying awake in a sleeping bag wondering what might be lurking just outside the tent flap. It’s early morning and I’m waiting for the other 3 people in our party to get ready for a day of bear viewing. I had asked Lance, one of two guides, if it would be okay to stand just outside the perimeter of camp while waiting. But now he wants me back inside, and the tone of his voice is saying ” quickly”.

Lance is an Iraqi war vet and although I’ll only spend 6 days with him I get the feeling he’s carrying some baggage but also seems very comfortable here among his huge neighbors. His home for three quarters of the year is Washington state and the other quarter is spent here in this camp, mostly alone. He is dropped off at the beginning of the season, around June, and is picked up at the end, around September. He prepares a simple breakfast each morning, packs an even simpler lunch, and given the circumstances, treats us to a fabulous dinner each night using no refrigeration and a propane cook stove. All the provisions are stored in 55 gallon drums. Berries are picked from behind the camp to make the syrup for our morning pancakes. Hot coffee never tasted better. But he was so much more than just a creative cook. As well as being an extremely knowledgeable and competent guide, he proved invaluable later in our trip when we were weathered in for an extra 3 nights, acting as a liaison with the mainland pilot. Working through his SAT phone ( $7 per minute) , he would radio in the current weather conditions every morning using the visibility of Yak mountain to the north and Kodiak Island across the strait as his guide. The pilots of these small planes navigate on a 100% visual basis, they had a tremendous amount of trust in his judgement.

My attention at the moment, however, is focused directly on the creature making it’s way up the beach and heading directly for our camp. He’s trotting up the beach now and stops directly in front of me about 30 feet away. Our eyes meet and we both just stare. I can’t believe I’m looking into the piercing eyes of a wild Gray Wolf. And there’s nothing but sand and space between us. I was certain that I’d see my share of bears on this trip, but I only dreamed I might catch a quick glimpse of a wolf. He just stands there, staring, assessing me. Sizing me up maybe ? I feel that he’s looking at me but also right through me. No fear, no aggression, no apprehension that I can detect. Giving off no signals at all aside from total confidence. And I feel a strange mix of the unknown and the familiar. Like an extremely large dog has just wandered into my yard and I’m trying to determine if he’s dangerous. Nick Jans, in his novel ” A Wolf called Romeo” gives this insight; ” The true measure of distance between wolves and dogs lies in the eyes. A dog’s may display intelligence and engagement, but being caught in a wolf’s unblinking gaze is like standing in the path of a laser. That startling intensity bores in and seems to take the very measure of your being”. He seems just as curious in me as I am in him. And just as easily as he approached, he turns and saunters off. Leaving me in awe, spellbound. Endless fodder for future dreams and nightmares.

” We have doomed the wolf not for what it is, but for what we deliberately and mistakenly perceive it to be-the mythologized epitome of a savage ruthless killer-which is, in reality, no more than a reflected image of ourselves”.